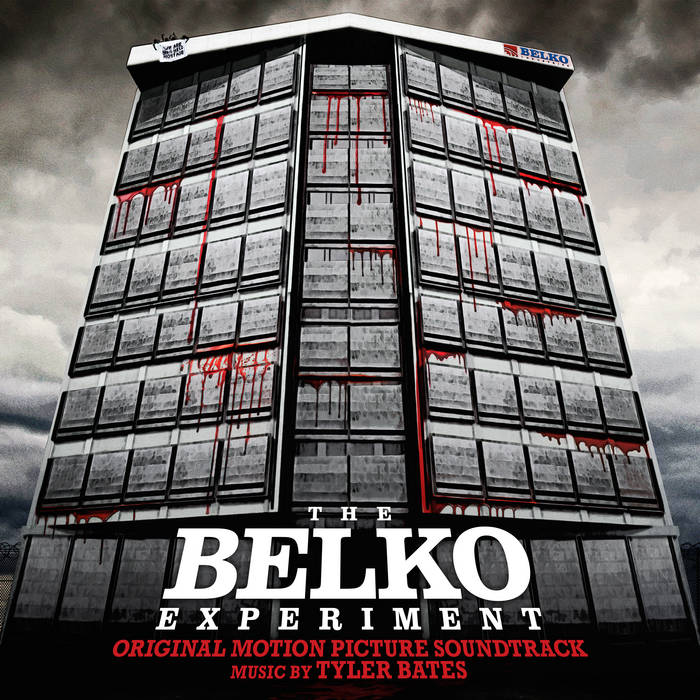 “I read the script several years ago when James Gunn wrote it, but once Greg McLean showed me a cut of the film, it sparked an interesting approach to scoring it than I had previously imagined: disturbing and emotional, yet non-orchestral,” Bates described. “Greg kept the incredibly dark sense of humor beneath the violence, which in turn kept me focused on the narrative.”

Written by the acclaimed writer/director James Gunn (GUARDIANS OF THE GALAXY, SLITHER) and directed by Greg McLean (creator of the WOLF CREEK franchise), THE BELKO EXPERIMENTis a twisted social experiment, where a group of 80 Americans are locked in their high-rise corporate office in Bogota, Colombia and ordered by an unknown voice coming from the company’s intercom system to participate in a deadly game of kill or be killed.

“I first addressed the initial ‘lock-down’ sequence to establish an interesting tonal approach as the characters are initially shocked, then panicked, descending into denial, and ultimately transitioning into survival mode. That particular sequence is where the seeds of story-telling through the music are planted,” Bates described.

ABOUT TYLER BATES
Composer, songwriter, producer, and multi-instrumentalist Tyler Bates’ work resonates deeply throughout film, television, video games, and pop culture at large—from critically acclaimed blockbusters such as JOHN WICK and GUARDIANS OF THE GALAXY to WGN’s SALEM and Zack Snyder’s groundbreaking 300. An adept and versatile music mind, he develops a distinct sonic palette for each project that is reflective of the director’s unique brand of story-telling and emotion, whether it be sweeping epic grandeur or sheer terror.

In 2004, after a decade of writing film music, he scored Zack Snyder’s reimagining of DAWN OF THE DEAD written by James Gunn, igniting longstanding relationships with both. His soundtrack for Snyder’s 300 quickly became one biggest-selling score albums of the 21st Century. 300 was followed by further collaborations with the filmmaker such as WATCHMEN and SUCKER PUNCH. A partnership with Gunn evolved from the 2006 cult favorite SLITHER and led to SUPER and Marvel’s GUARDIANS OF THE GALAXY, which became the third highest-grossing film of 2014 worldwide. Throughout Bates’ career he has worked with iconic and influential filmmakers, including Academy Award® winner William Friedkin on KILLER JOE and Rob Zombie on THE DEVIL’S REJECTS, HALLOWEEN, and HALLOWEEN II.

His imprint on the gaming world is apparent in his music for KILLZONE SHADOW FALL, GOD OF WAR: ASCENSION, ARMY OF TWO 40TH DAY, and more. Bates’ work in TV spans a wide range of styles from Showtime’s CALIFORNICATION to Audience Network’s highly popular KINGDOM. An on-camera performance for CALIFORNICATION is where Bates met Marilyn Manson, kicking off another focused and fiery creative alliance. Tyler Bates co-wrote and produced Manson’s THE PALE EMPEROR, which bowed at #6 on the Billboard Top 200 and Rolling Stone proclaimed, “#1 Metal Album of 2015.” “Cupid Carries a Gun” became the main title theme for WGN’s hit series, SALEM, while “Killing Strangers” figured prominently in Keanu Reeves’ JOHN WICK. He also held down lead guitar duties on Manson’s Hell Not Hallelujah Tourand his 2016 arena tour, playing to a half-million fans alongside metal giants Slipknot.

Beyond co-creating Manson’s forthcoming SAY10, 2017 sees Tyler’s scores for Charlize Theron’s THE COLDEST CITY, JOHN WICK: CHAPTER TWO, co-composed with longtime friend Joel Richard, the Gunn-penned and -produced THE BELKO EXPERIMENT directed by Greg McLean, and the mega-anticipated GUARDIANS OF THE GALAXY VOL. 2, directed by James Gunn. Ultimately, Tyler Bates’ natural ability to connect with his collaborators yields music that not only becomes part of the film and television zeitgeist, but that resonates with authenticity to audiences around the globe.

Bandcamp Daily  your guide to the world of Bandcamp

Featuring interviews with the mighty Haitus Kaiyote and genre-busting L'Rain.